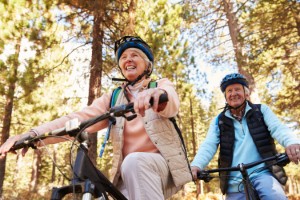 The benefits of physiotherapy and regular exercise can include the prevention of obesity and significant improvements in mobility, with a new study suggesting the effects could also stretch to helping slow down the ageing process.

According to research carried out at the University of California San Diego School of Medicine, people who take part in little or no exercise and sit down for ten hours or more each day are typically biologically eight years older than those who regularly partake in physical activity.

The study focused on women, with the exercise habits of almost 1,500 participants aged between 64 and 95 monitored over the course of a week to allow doctors to investigate the effect of their usual level of exercise on their health. Participants’ movements were tracked via a monitor placed on their right hip for the seven-day period.

It was found that women who were less active and who stayed sat down for longer periods of time tended to have shorter telomeres, which are located on the ends of DNA strands and play an important role in preventing cells from deteriorating with age.

Short telomeres were particularly evident in participants who exercised for 40 minutes or less each day and who remained seated for ten hours or more, which suggests that physiotherapists should recommend their elderly patients try to remain active for at least 40 minutes every day.

This finding therefore indicated that women with lower levels of exercise were on average eight years older biologically than their more active counterparts, demonstrating how regular physical activity could slow down the body’s natural ageing process, potentially even lengthening people’s lives as a result.

“Discussions about the benefits of exercise should start when we are young, and physical activity should continue to be part of our daily lives as we get older, even at 80 years old.”